The Number Line Contains All Your Favorite Books! | exSTEMsions 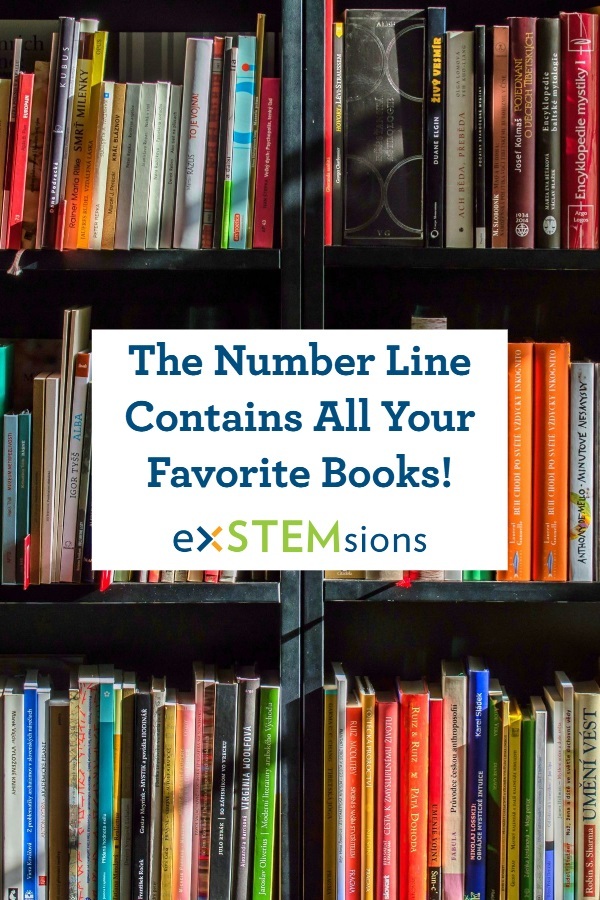 A recent problem was a fun exploration of the number line and how it can be used to solve a tricky challenge.  The number line is something we’ve all seen from a young age, and it’s useful, but maybe it doesn’t seem particularly... interesting.  But actually, there are all kinds of amazing things hiding in your plain old number line, you just have to know where to look. And that’s what we’re here for: showing you strange and exciting math in the unlikeliest of places!

In order to take this little math journey with you now, we need to think about language, and the symbols we use to communicate.  In particular, we’d like to figure out how we can turn any sentence in the English language into a number (this works for any language, really).  There are certainly less than 100 symbols used to communicate in written English: 26 lower case letters of the alphabet, another 26 upper case, around 30 or so common punctuation marks and assorted symbols (like the percent sign), and the empty space that separates words. We don’t need to know exactly how many symbols there are, but it’s a pretty safe bet that there are less than 100. That means that we can encode each symbol with a two digit number, from 01 through 99.  One way to begin creating this code is to naturally say “a” will be coded with 01, ..., up to “z” as 26; then capitals, from “A” as 27 to “Z” as 52. How about we code the empty space as 53?  The period symbol can be 54, the comma 55, and so on.

Now we can use this coding to turn any sentence into a decimal number: convert each symbol in your sentence into its 2-digit code, and then put a decimal point in front!  For example, under this coding, the sentence “We like math.” is given by the decimal:

Note that the decimal point makes our number between 0 and 1, always.

The number line has all your novels

You can now turn any book you want into a decimal number between 0 and 1!  Just turn every symbol in the book into its 2-digit code, and put all these numbers together (without changing their order), with a decimal point up front!  But remember, every decimal number is represented by a point on the number line. That means every book that’s ever been written has a position on the number line, somewhere between 0 and 1!  Weird!

The number line has ALL the novels!

But wait, there’s more.  There’s a point on the number line that represents every novel that’s ever been written.  How?  Well, try a thought experiment (see our blog here for more on that concept)!  Imagine every novel being converted into a string of numbers, using our code, but don’t place any decimal points yet.  Put all of those “novel numbers” together, one after the other, into one really long sequence of numbers, and NOW put a decimal point in front of it; call this number N.  This number N is somewhere on the number line, between 0 and 1.  And that single location on the number line contains a vast amount of information, the complete texts of millions of books!

One location on the number line, so much information!

But wait, there’s more!  What if we wanted an alien, somewhere out there in the universe, to be able to read all of the wonderful fiction that we humans have produced?  Would we pack a thousand rockets full of books, and launch them all? Maybe there’s a better way, if we use our number N!  Just draw a number line, and carefully, plot N on that line, maybe with an electron microscope, to get that placement exactly right.  Now we just send this number line to outer space.  A single point on a line is all the alien needs to extract the entire literary output of the human species!  No?

Can one point really say so much?

It’s really fun to think about putting a ton of information into just one point on a line, but alas, in practice this wouldn’t work.  That’s because that number N is a really long decimal.  It’s so long, that we mere humans would never be able to plot that point on the number line!  The precision necessary to find N on the number line would require us to make a mark thinner than the smallest subatomic particle!!  Perhaps a supernatural being could do it, but we can’t.

Although we can’t actually mark N on a number line, this number N does exist, and it is on the number line somewhere… what a weird and interesting number!  Who would’ve thought that the number line actually contains such information? And we can go further, but we’ll leave that to you to think about: how could you find a number on the number line that represents every single book ever written, both fiction and non-fiction?   Would you need more symbols? What else can you represent with decimals?  Conduct incredible thought experiments, and have fun with it!

Need more interesting things to think on? Click here to sign up for our monthly newsletter! to get awesome tips and a mini-challenge, all designed to help you build vital problem-solving and critical thinking skills in your child.

To preview, try out, or purchase some of our favorite problem-sets, visit and follow our Teachers Pay Teachers store.