What Happens When You Can't Build Something to Help Solve a Problem? | exSTEMsions 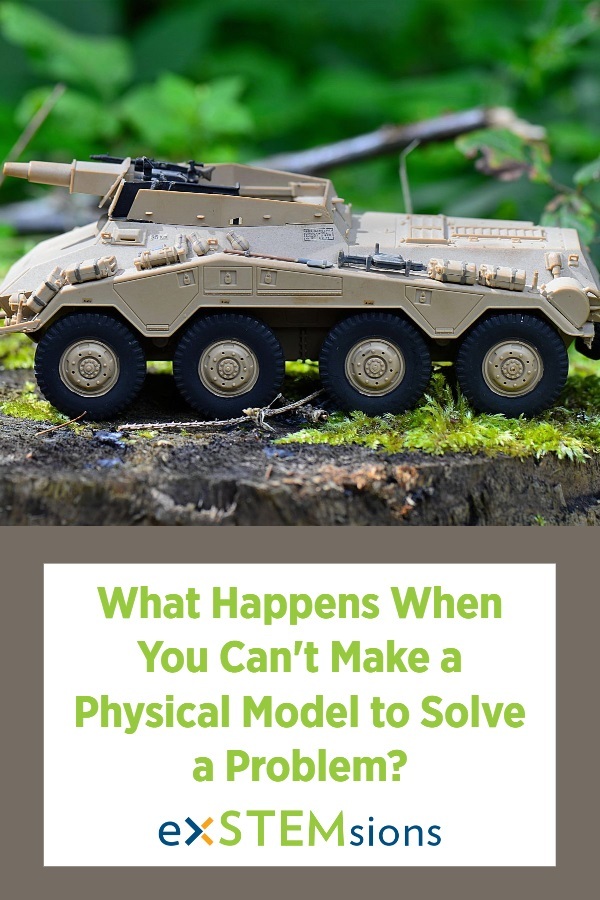 Most of us don’t have a tank in the driveway. If we want to solve a problem that involves a point moving a distance on tank tread, we can’t exactly go outside, put a point on our tank tread, drive a bit and come back and measure. So, if we don’t have a tank, then what are our choices? Well, we probably aren’t going to make a tank, but we might be able to find a toy tank, and experiment. We might find that the tread on a toy is pretty small, and makes it hard to do the kind of measurement we’re looking for. Sure, we could do it, but it might be more complicated than it’s worth. Okay, so next option, we can make a model of what’s happening with the tank (I imagine something like toilet paper rolls and string maybe…). This could work, but it might be more crafty than we bargained for, and might not work the way we need.

...so why not model it in your imagination?

Having exhausted the physical model options, we might consider another avenue, like drawing. Certainly possible, but requires some imagination, right? We’d have to draw a tank with the point on the tread, and then draw the tank that moved, and figure out what happened to the point without actually seeing it happen. The moving and the seeing are all things we have to think about and visualize, because we don’t have a physical version of a tank that really works for us. This is when we get into the territory of “thought experiment”; we’re imagining all of the different things that could be happening, rather than actually modeling. We might be drawing the results, and using them to help us, but the work is all going on in our minds. This can be pretty tough for a learner to do. It’s a lot to hold in a head at once, and sometimes it’s hard to convey thinking, clearly, in either pictures or words, even just to keep track of their various ideas and conclusions.

You can rely on your mental models

There are plenty of examples of problems (in all different subject areas) where conducting thought experiments, and finding a way to draw or write about the ideas and conclusions that come from them, is more useful than an actual model. We don’t have a tank, and constructing anything that realistically has the same effect isn’t easy, but we can imagine how the tank would move, and what the results would be. Spending time and energy on a model, in a case like this, isn’t really all that helpful, when in the end much of the solution is going to come from what we think and imagine. The model might actually slow us down, rather than help us along.

Making models is great. Drawing pictures to represent problems is also great. But, it’s nice to know that, when the problem doesn’t really seem to lend itself to making a model, that it’s okay to rely on imagination. We still have to write things down (don’t think you’re entirely off the hook there - how else would we keep track of it all?), and practice carefully communicating what’s going on in our thoughts, with the world and people around us. The sneaky benefit of problems that aren’t super model-friendly is that they really force us to practice clear communication (in writing, in pictures, out loud…), since the there is only one person who knows what he is thinking - the thinker!

Did you find this post helpful? Follow the blog using the link at the top of the page to get notified when new posts appear!