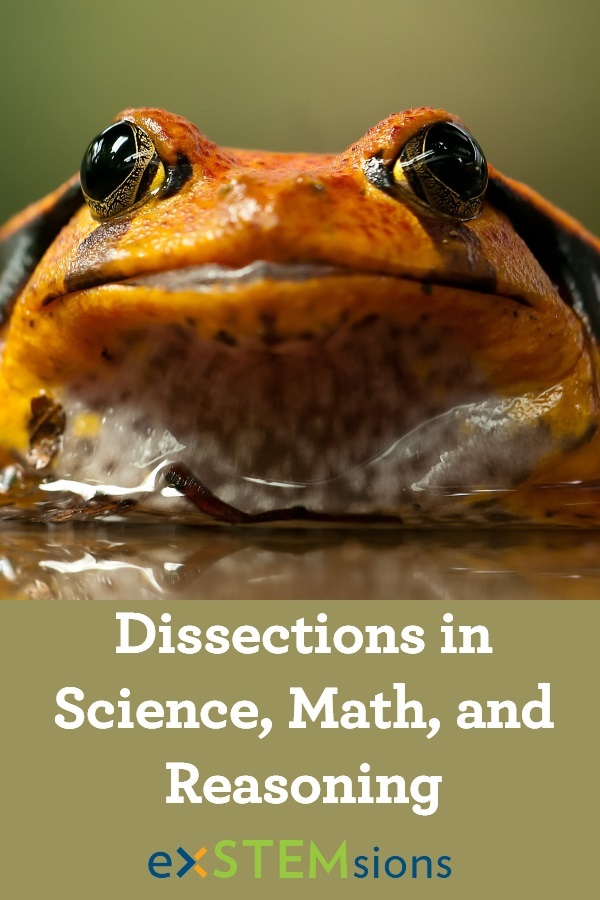 When I first began my teaching career, I taught both math and science to middle schoolers. My first year, I decided to take on frog dissection with my 8th graders. It was a small private school, the curriculum was pretty open, and I thought it would be fun. Now, you are probably waiting for me to say it was an utter disaster, but no, it was awesome - looking back many years later, it’s still a fond memory I have from that year, with those kids, in that classroom. I later changed schools, and as my career moved on, I shifted away from science toward math, full time. And while I missed dissecting frogs and doing other messy, crazy science labs, that didn’t mean I didn’t do messy, crazy math labs! In math, dissection can be as important as it is in science - it just works a little differently.

At this point, you might be wondering what on earth I’m talking about. Well, in math, when you cut something into separate pieces (remember that frog?), it’s called a dissection. For example, have you ever seen tangrams, or explored them with your kids?  The pieces of the tangram set are actually made by dissecting a square into those smaller shapes! (We actually like tangrams so much we wrote a whole post about them, which you can read here.) Often when we dissect a mathematical object, we take a shape (like a square, in this week’s problem) and carve it up into smaller pieces that we then use our problem solving and critical thinking skills to draw some sort of conclusion.  The way we arrive at our desired conclusion might require us to rearrange those pieces, or try a different dissection, and notice important patterns. But the idea of dissection is larger than just some operation that we do in geometry; we are dissecting things all the time, whenever we break something down into smaller parts to get a clearer understanding of what’s going on.

Dissection as a way of thinking

So, here’s the million dollar question: why do you care? Well, if you think about what happens when you or your kids learn something new, in math, or anywhere else, dissection is often an important part of the process. Not the literal, take-apart-a-frog kind of dissection, but the one where we take something and break it into smaller components to understand what’s happening a little bit better.  Being able to see a situation both as a whole, but also as a sum of its constituent parts, is a useful skill to employ to really get what that situation demands of you.

As we, and our kids, move through the world around us, we must continually work to simplify tasks, break down problems, and use reasoning skills to figure out what the task or problem is really made of, so we can move toward a solution. When I dissected frogs with 8th graders, yes, we learned about the parts of a frog, but one of the more important lessons was about carefully taking apart a whole to see what it’s comprised of, and then figuring out what that meant. This is what I wanted my students to take away: that when you break something apart, whether it be a frog, a square, or a problem, there is something to be learned about the pieces, that you can then use to appreciate the whole in a whole new light.

Dissection is awesome in math, in science, in other aspects of STEM - it doesn't matter which subject you are using it in, it's still awesome. The next time you or your kids want to take something apart, treat it like an experiment. Talk together about the whole, and about the components of that whole, and consider what that information can help you do, and how it impacts the problem you’re trying to solve!

Want to practice some dissection (without all the sticky parts)? Try out one of our very favorite problems on Teachers Pay Teachers, Squares!