Kids Can Learn SO Much Through Tangram Paradoxes! | exSTEMsions 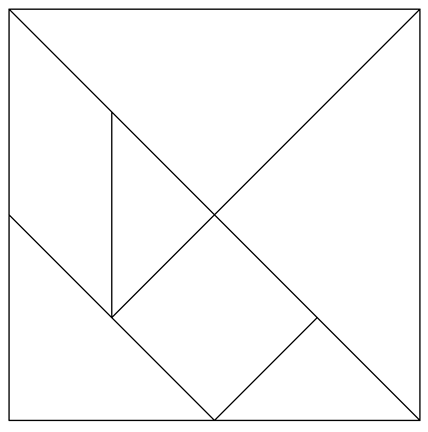 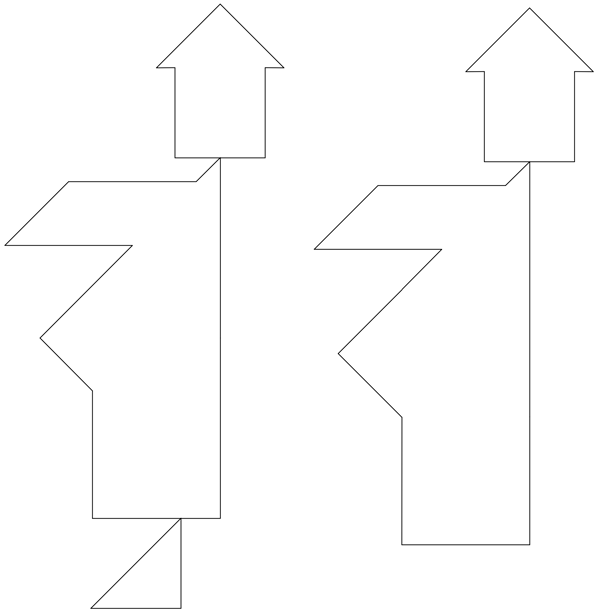 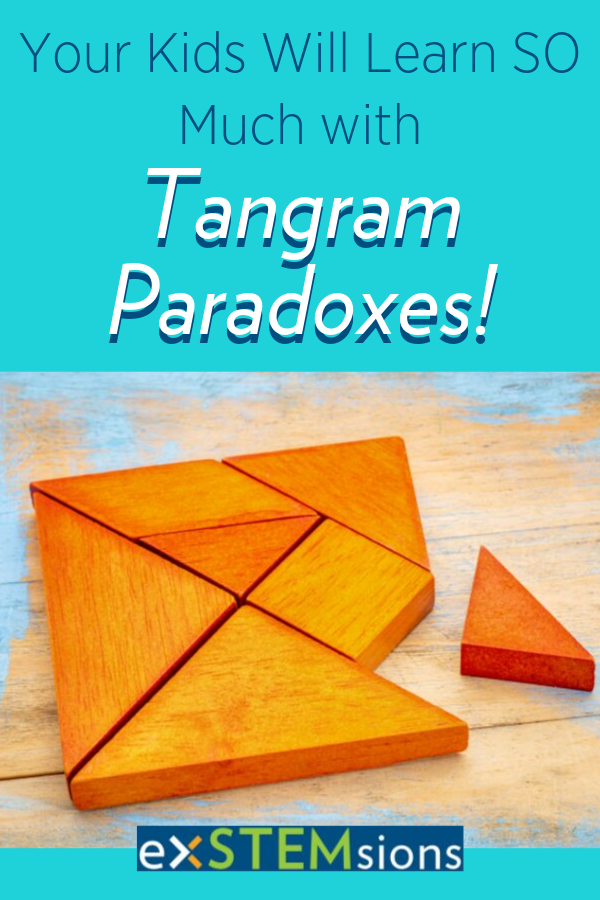 There are so many unbelievable things in our world.  For example, recent studies have indicated that plants might communicate with each other through their roots! That plants communicate in this way seems rather unbelievable, but it may very well be true.  Similarly, there are things in mathematics that are unbelievable, but nonetheless true; they’re called paradoxes.  One of our recent problems dealt with mathematical paradoxes that arise when playing with one of our very favorite geometry tools, tangrams. A set of tangrams is made up of 7 simple geometric figures, which you can put together to build all kinds of fun shapes.  For example, below the 7 tangrams form a square:

A tangram paradox is a pair of shapes that can each be built using the same 7 tangram pieces, even though it seems totally unbelievable!  To see what we mean, take a look at the following two shapes:

Is there a way to make these two shapes with the same pieces, even though it seems one “person” has an extra foot that the other doesn’t?  Unbelievable, but… yes!!

Tangrams are amazing, but… so what?

What’s the point in all this? Why should we bother to explore tangram paradoxes with our kids?  Simply because they’re interesting? Sure, but that’s not all! We think of puzzles like these tangram paradoxes as small but mighty. The pieces are small enough to carry around in your pocket, and since there are only 7 of them, you can easily keep track of them all. But, from those 7 humble shapes can come SO much good - it’s hard to even know where to start!

First off, there are important mathematics skills that can be nurtured with tangrams. When your kids work with tangrams, they’re building visualization skills, which involves the ability to understand the space around you and how and where things fit in it.  Kids are also exploring all kinds of geometry skills, like understanding the attributes of shapes and how those shapes interact, part-whole relationships, and issues of scale, where kids need to understand how to visualize small and large shapes in correct proportion.  Such geometrical thinking is a good opportunity to do math that isn’t driven by numbers, where they’re doing lots of mathematical thinking without any computation!

Next, there are many problem-solving and critical thinking skills that can be introduced and strengthened with tangram paradoxes. For starters, these puzzles push kids to step past roadblocks.  Many times in life we’re faced with situations that just seem impossible to figure out - until we take that first step, and then the next, and find that maybe it’s not so impossible after all. Of course, to overcome such obstacles requires us to think creatively and flexibly.  When you build one of the two shapes in a paradox, it’s incredibly tempting to recreate the solution you used for the first puzzle in the second puzzle, since the two shapes are SO similar… but it won’t work. The nature of the paradox is that the second shape is similar to the first, but is different enough that kids have to push past their first solution and find a new, alternative way to arrange their tangram pieces that will get them a result that is nearly the same, but slightly (and amazingly!) different than the first.

Creativity and flexibility ties nicely with another really important, but related skill.  So often we teach kids, and rightly so, to think about problems they have solved previously to solve a current problem. Retracing a solution from a previous problem is great, but where these tangram paradoxes are concerned, kids need to use their prior knowledge to help them see what not to do, rather than what to do!  Sometimes using previous experiences to help see which approaches won’t work now is just as important (if not more valuable) as seeing what will work!  Tangram paradoxes present a valuable opportunity to learn and practice avoiding retracing a prior solution, as that isn’t always easy to tease out with kids as they work on more standard problems.

There are many more skills to uncover, and you’ll discover and hone all kinds of new skills by working collaboratively and comparing strategies and solutions. In the end, there really is just so much learning that can come from these paradox puzzles. And while they’re great for kids who love puzzles, they’ll also pull in kids that don’t think of puzzles that way (I’ve seen this happen time and time again!).

Paradox puzzles are more than worth the time and energy that go into them - kids not only pick up important math skills, but they develop and strengthen a host of critical thinking and problem-solving skills along the way!

If you want to try out these amazing puzzles for yourself, check them out here, or subscribe!