Your Favorite Mathematician Should be Euler! | exSTEMsions 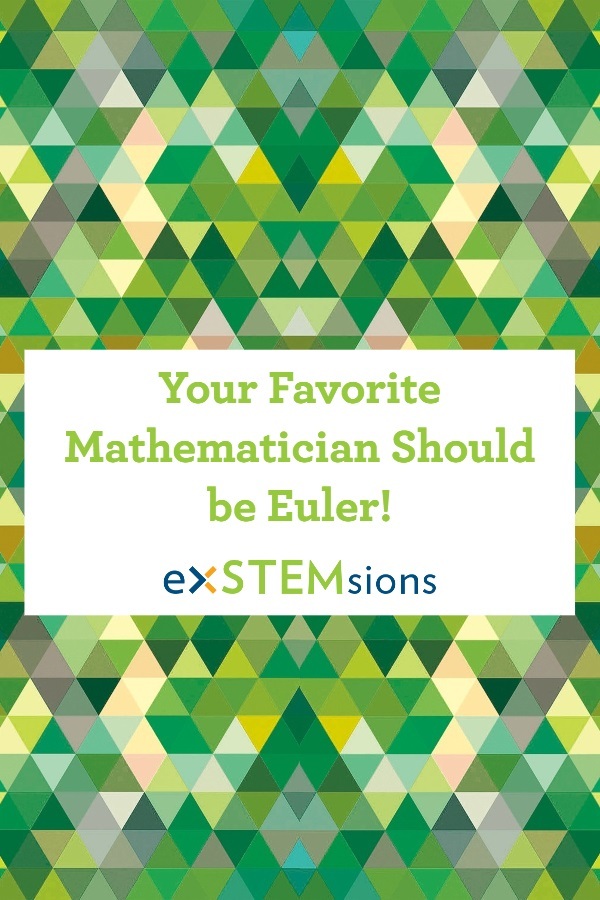 Euler: one of the greatest mathematicians

When you open a math textbook, everything is so nicely presented and organized.  It’s easy to think that math just appears like this, out of nowhere, in a nice little package.  But like any other subject, everything you study in mathematics had to be created and understood before it could be arranged neatly in a textbook!  The creation of mathematics is tough work, and it’s work that has spanned thousands of years. All of the labor that gives birth to mathematics is done by many, many people, all over the world.  And as we always like to point out, you don’t have to be a genius to do math, you just need to be willing to work hard. But, it’s nice to have a true genius to push human thought forward from time to time; physics has its Einstein, among others, and mathematics certainly has its geniuses too.  One of the greatest mathematical geniuses who has ever lived was named Euler (pronounced “oiler”).

Leonhard Euler was a Swiss mathematician who lived in the 1700’s; he was one of the most prolific mathematicians who ever lived.  Euler left his mark all over math, including geometry, differential equations, real and complex analysis, combinatorics, graph theory (you subscribers out there, you learned about this in our current Problem), number theory, and logic.  There are dozens of numbers, equations, and theorems named after Euler. We’d now like to present one of the most famous and beautiful equations associated with Euler.

A few ingredients for Euler’s equation

So, there are a few special ingredients that go into the equation you’re about to see.  First, from geometry, we need a number that everyone knows and loves: \(\pi\), the ratio of a circle’s circumference to its diameter.

Next, there’s the number e, called “Euler’s constant” (of course!); just like \(\pi\), it’s irrational, so its decimal representation is infinite and non-repeating, and starts off like this: e = 2.71828….  It’s really important, and pops up in mathematics everywhere (especially calculus), including when you earn compound interest!

Yes, equations can be beautiful!

Now we have three interesting numbers, i, e, and \(\pi\).  Is there any simple connection between them?  Yes, look:

This is the very famous, the one and only,  “Euler’s identity”. (Here, “identity” is just a fancy word for “equation”.)  For one thing, five really important numbers, e, i, \(\pi\), 0, and 1, are all involved in the same expression.  And that’s neat. But why is this special?  Stuff like this happens all the time in math… equations relate all kinds of numbers, yes?  So what? Well, note that e, \(\pi\), 0, and 1 are “real” numbers, just ordinary numbers like the kind we work with all the time.  However, that pesky imaginary i is in there!  To see how weird this is, rewrite the above equation like so:

Now, you may have never even seen e before, but that doesn’t affect the stupendousness of this formula.  Here’s the issue: how in the world do you take a real number, e, and raise it to something imaginary, i\(\pi\), and get a real number, \(-\)1, back?  Let that sit with you.  I mean, that’s awesome. It’s just awesome.  Of course, those of you who know a little complex analysis may understand this equation completely, and say “yawn”, but if you’ve never seen this before, it really is awesome.  And if you’ve never learned why it’s true, then you have a real adventure waiting for you if you decide to take it!

Want to learn more about fabulous mathematicians, or about equally fabulous math that you can do with your kids? Use the link at the top to follow this blog. Want awesome tips and a mini-challenge, all designed to help you build vital problem-solving and critical thinking skills in your child?  Click here to sign up for our monthly newsletter!